The Easiest Subway Maps of Tokyo

Tokyo's subway route map is extremely complicated as well as JR Trains on the ground. Seeing is believing. 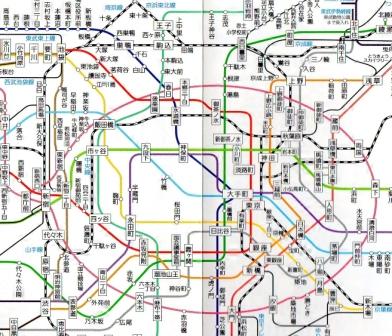 There are 13 subway lines and 285 subway stations in Tokyo. Actually, many international travelers get lost in this maze of the metro system.
You need to take a subway to visit some of Tokyo's Must-Sees, including Asakusa, Tsukiji Market, Roppongi, etc, because the nearest stations of these places are not JR stations but subway stations.
Talking from a local's point of view, you don't need to stare at the entire of the maps. Let's simplify and reorganize the maps to understand Tokyo. I picked up some subway lines leading to Tokyo's tourist attractions.
Print them out and keep this page for your better travel! (All Free but Personal use only.)
cf: Internet Access in Japan 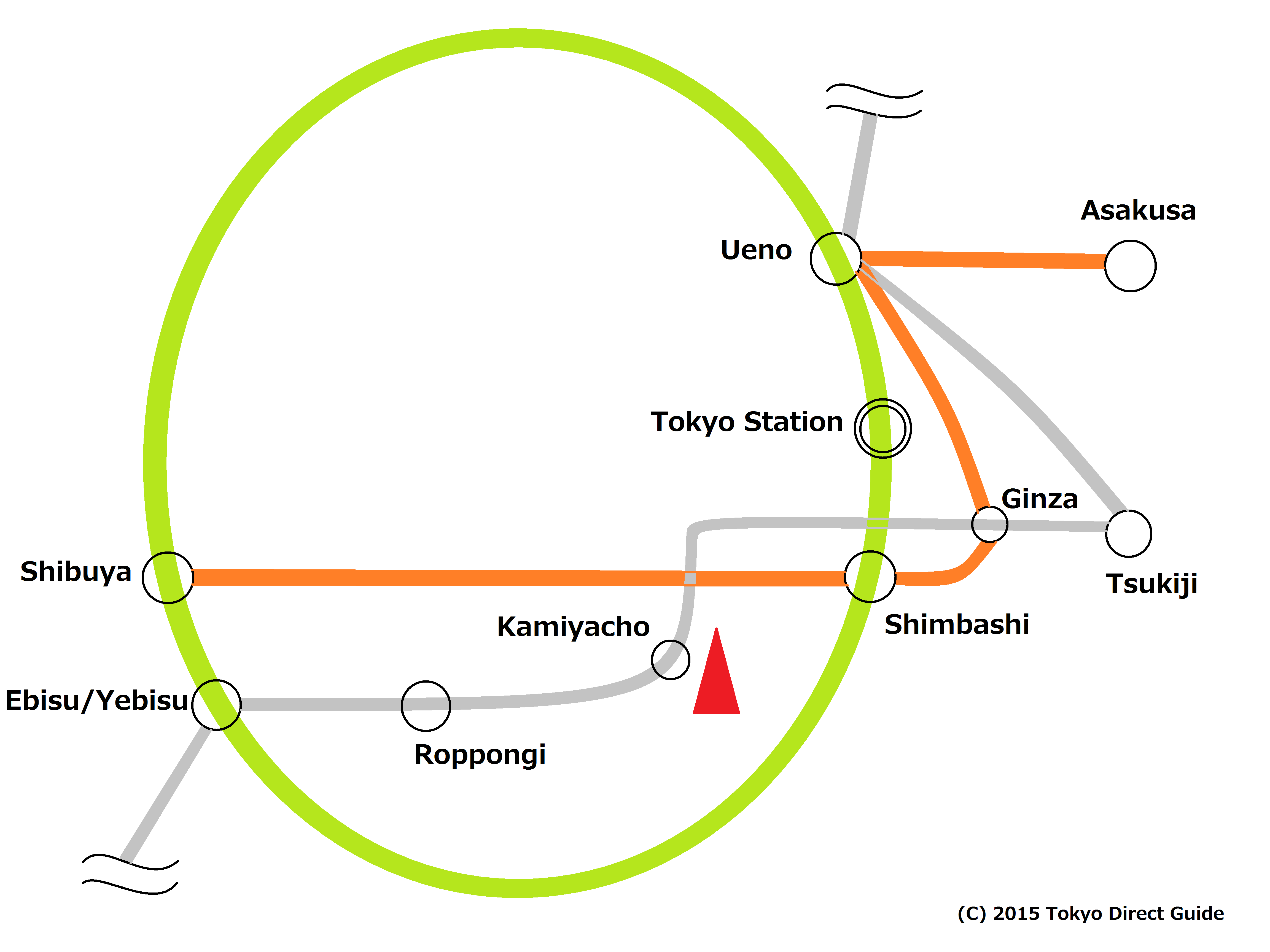 *I draw JR Yamanote Line in all these subway maps. To learn Tokyo's maps quickly, learn this loop line from here.

Ginza Line is the first subway in Japan; People connected all the important places in Tokyo when they were able to draw a subway route freely.
It goes between Shibuya and Asakusa, through the very center of Tokyo City such as Omotesando (Harajuku area,) Ginza, Nihon-bashi, Ueno, etc.
Ginza Line is the best way to go to Asakusa.

Hibiya Line is a major way to go to Tsukiji Market and Roppongi. The major stations to get on a Hibiya Line train are Ebisu, the next station to Shibuya, Ueno and Akihabara. They are all on JR Yamanote Line.
Kamiyacho is one of the nearest stations to Tokyo Tower; It is a 7 minutes walk.

Tip: If you go opposite to Tokyo City from Ebisu, Hibiya Line directly goes through Toyoko Line and Minato-Mirai Line. It takes you to China Town and Minato-Mirai district, which are very cool bay side area in Yokohama. 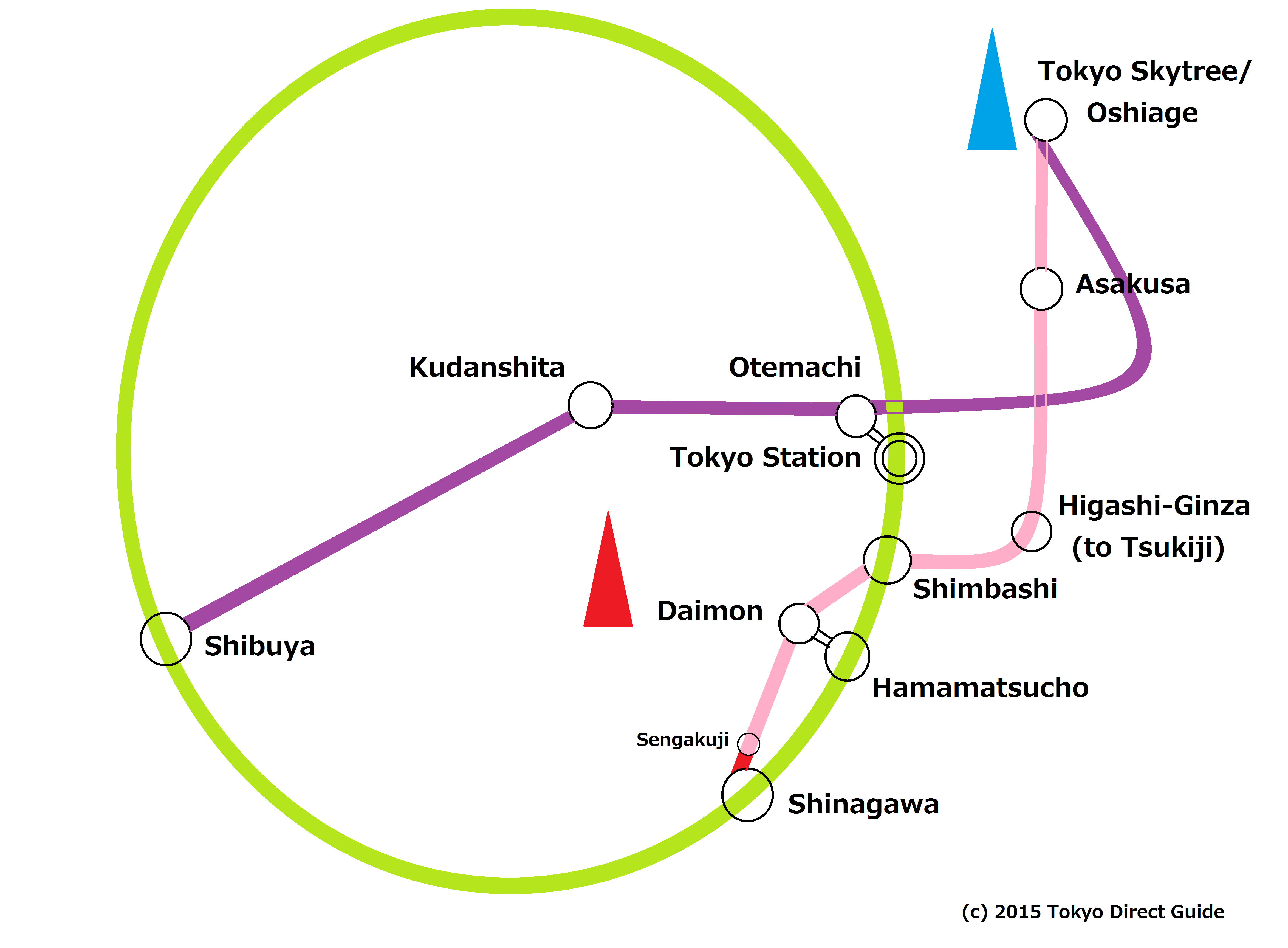 Hanzomon Line has many important stations, and it radically became even more important because of Tokyo Skytree.
The major stations to get a Hanzomon train are Shibuya and Otemachi, which is connected to Tokyo Station.
Kudanshita is the nearest station of Chidorigafuchi/Imperial Palace, which is one of the best cherry blossom spots in Tokyo. (You can go there by Shinjuku Subway Line or Tozai Subway Line, too.)

Asakusa Line is another subway which is getting more and more important. It is directly connected with Keikyu Line, which is a major way to go to/from Haneda Airport.
You get on Keikyu Line at Shinagawa Station, and you will be on Asakusa subway line after Sengakuji station. Asakusa Line takes you to Higashi-Ginza, which is one of the nearest stations of Tsukiji Market, Nihon-bashi, Asakusa and Oshiage/Tokyo Skytree at last.
JR Hamamatsucho and Daimon subway station are near Tokyo Tower; 15 minutes walk from Hamamatsucho, 10 minutes walk from Daimon. 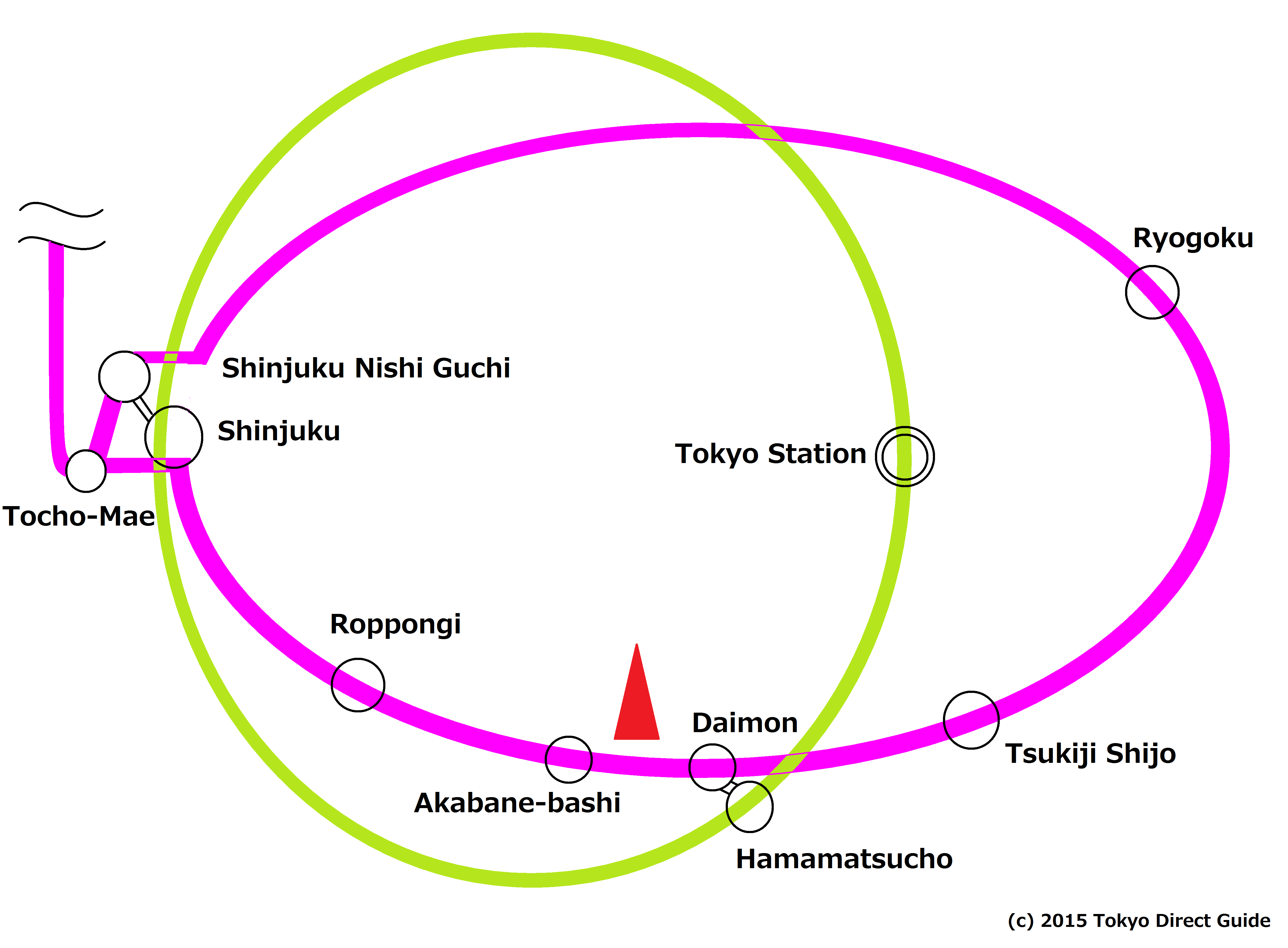 Oedo Line is the newest subway in Tokyo; The route map is designed for convenience of people, including travelers.
It is a loop line - almost, actually - from Shinjuku. It is another major way to go to Roppongi and Tsukiji Shijo(=Market). It also stops at Ryogoku, where there are the sumo wrestling stadium and Yedo Tokyo Museum.
"Tocho-Mae" means, "in front of Tokyo Metropolitan Government." The building has a free observatory. It is a 10 minutes walk from Shinjuku Station.
Akabane-bashi is the nearest station to Tokyo Tower; It is a 5 minutes walk.

Tip: Oedo Line is the newest subway in Tokyo; It means it runs the deepest. As a result, the escalators to/from the platforms are very long.
If you are taking Oedo Line for a business conference or something that you cannot be late for, take it early!

If you are going to Tokyo Tower, except JR Hamamatsucho, Daimon, Kamiyacho, and Akabane-bashi, it is a 6 minutes walk from Onarimon Station of Mita Subway Line. You can get a Mita line train at Otemachi (connected to Tokyo Station,) Meguro, Sugamo, Suido-bashi, etc.
How to Get to Tokyo Tower by train - the simplest explanations & maps

If your distination is not on these maps, see the JR Train Map as well.
You can download the complete subway maps from the following links. Get BOTH maps.

Tip - Not to get lost

Tip - When get lost

Want to see MORE destinations?
See the Easiest JR Train Map as well as subways, and you will find most of Tokyo's tourist attractions and access to/from Narita and Haneda Airport.

Talking about Odaiba, the bay side district, see this.
Dig Tokyo here - http://tokyo-direct-guide.com/blog/

Don't make an unnecessary effort to learn all the 285 subway stations of the 13 lines.
Focus on your destination with the Easiest Subway Maps, and you can travel freely like a local.
Have a nice trip!